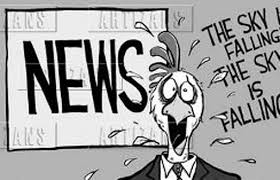 Among my least favorite things that come with the fall season are pumpkin spice everything, the college ranking freak out, and the data misinterpretation that stems from the release of the yearly state SAT scores. Each year after the College Board releases data on the average scores you get a new round of newspaper articles and 6 o’clock news reports on whether that state’s (or district’s) scores have fallen or risen. But what is consistently left out in the rush to report is any attempt at providing relevance and meaning to the numbers. Let’s check out some of this year’s journalistic gems:

SAT scores for the class of 2014 averaged a 497 in reading, 513 in math and 487 in writing — about the same as the last few years, according to a report released Tuesday by the College Board, the administrator of the notorious college entrance exam.

While the average reading score, 497, went up by a point from last year, math dipped by a point to 513 and writing is the lowest ever at 487. The class of 2006 was the first to take the writing section and scored an all-time high of 497.

Bulloch County’s 2014 graduates overall scored higher in all three components of the test, critical reading, math and writing, compared to scores posted by members of the Class of 2013. The school district’s mean scores in these areas resulted in a total score average of 1419, a 2-point increase over 2013 scores, but still significantly below the state and national averages of 1445 and 1497.

If considered separately, Connecticut’s public high school seniors last year scored 499 on reading — the same as the 2013 class. The average math score fell by 3 points to 500, and the writing score also was down, falling by 4 points to 500.

The average score in critical reading increased one point, while average scores in math and writing fell by one point. Scores have been either flat or slowly declining for the past several years, dropping 11 points in reading and seven points in math in the past decade.

Scores in critical reading, math and writing have been either flat or slowly declining for the past several years, dropping 11 points in reading and seven points in math in the past decade

SAT scores up in SC, down in some Midlands districts – MyrtleBeachOnline.com

What’s notably absent from not only the headlines (which is forgivable) but also from the articles (which is unforgivable) is any attempt at quantifying, explaining, or qualifying what the score changes mean (with the notable exception of the MyrtleBeachOnline.com article, kudos to you Jamie Self). Most of these articles simply report on score changes as if they are meaningful with no further context necessary. And what really gets my goat (as the old folks say) is that these articles all fail to answer three key questions that should be answered whenever any statistics are provided:

It seems that these journalist have bought into the hype of big data and have regurgitated the data provided by the College Board but put no thought into what that data might mean or what factors explain or provide meaning. Before I get off on a more theoretical rant and since the internet loves list, let me give you the top 5 reasons to ignore all the brouhaha about these fairly minimal SAT score changes:

With all the statistical shenanigans and test changes (2 major rewrites and many minor changes) that have taken place in the test itself, it’s no surprise that since 1972 scores have fluctuated little year to year. As with most statistics they only become relevant in large scale (why are SAT scores down over the last 20 years is an important question, not why are they down in the last year).  All in all these articles simply induce panic, hand-wringing, or crowing with no context, explanation, or real understanding of what’s going on behind the scenes.

To quote the inimitable Chuck D

One thought on “The Sky is Falling!”

This site uses Akismet to reduce spam. Learn how your comment data is processed.